Finally the Aramco leadership or i would say the crown prince Mohammed Bin Salman (MBS) gave the nod for IPO of the colossal oil firm. The intent was clear from last few years that Saudi Arabia wants to diversify its sources of revenue and reduce its over dependence on Oil. The 2030 Vision document prepared under MBS elaborated on the strategy. The first step of it was the IPO of Aramco. The initial plan was to raise $100 billion at a $ 2 trillion valuation. The IPO achieved in raising a quarter of it.
Aramco : History and Hegemony
Standard Oil of California discovered oil in the desert of Saudi Arabia in 1903. This was followed by Texaco and Chevron forming the Arabian American Oil Company (Aramco) to develop the oil fields. The Saudi Government gradually started buying the assets of the firm and finally nationalized it in 1980 giving it the power over its reserves and renamed it as Saudi Aramco in 1988.
The power of the firm can be easily ascertained after looking at its assets. Saudi Aramco has 330 billion barrels of oil and gas in its reserves, a quarter of the world’s reserves and ten times that of its next big rival Exxon Mobil. In addition to it the cost of extraction of Oil in Saudi Arabia is much cheaper than at other places due to cheap labour and easy to extract. The price to breakeven could be as low as $25- $30 whereas for international players its around $40 – $50.
The cost advantage and the rise in crude prices over the last year played handsomely for the firm. It did sales of $355 billion for the year 2018 and had a net income of $111 billion.
Saudi Aramco & Saudi Arabia : Intertwined
Before going into the technicalities of the IPO its very important to understand the position of Aramco in Saudi Arabia. Every country has big Oil firms such as Exxon in US, Petro China in China,
Gazprom in Russia and Indian Oil Corporation in India but none of these firms are so big in comparison to the country as to become a proxy for the country. Saudi Aramco controls the Oil in Saudi Arabia which in turn derives 80% of its GDP from Oil. Hence its not a normal company but an extraordinary one. This power answers the questions on its ownership control. The company is controlled by the royal family who happen to run the country as well. We should remember Saudi Arabia is a monarchy and not a democracy.
This raises serious questions on Corporate Governance issues. Can the shareholders of Aramco ever have a say on its working? The country risk associated with Saudi Aramco also makes it a risky bet.
A company with all assets in one country located in a volatile geography would definitely give sleepless nights to investors.
Pricing of IPO: Multiples Approach
The crown prince wanted a valuation of $2 trillion almost 1-2 years back and spoke about it. As the IPO process got initiated the bankers believed that its too high and probably something around $1.5 trillion would be more meaningful.
For this blog i have taken ten big integrated oil firms from around the globe and have used them as a reference to calculated the Enterprise Value of Saudi Aramco

Using the above chart and using different metrics, it can be seen that the valuation ranges wildly from few hundred billions to well over a trillion dollars. If we remove the extremes and take an average
Valuation of Aramco: Cash flow Approach
The value of Aramco can be derived using the traditional methods of cash flows discounted taking into account risks especially country risk.
a. Dividend Discount Mode:
Aramco made a promise in the prospectus to pay $75 billion in dividends every year from 2020 to 2024 with expectation to continue and grow after 2024.
Key assumptions:

b. Free Cash Flow to Equity Model:
In the prospectus the company has promised to pay $75 billions per year for the next 5 years. This could happen but may not also depending on circumstances.
Key assumptions:

c. Free Cash Flow to the Firm Model:
The third way is to value the company at the Firm level taking into account the low debt level of the firm. 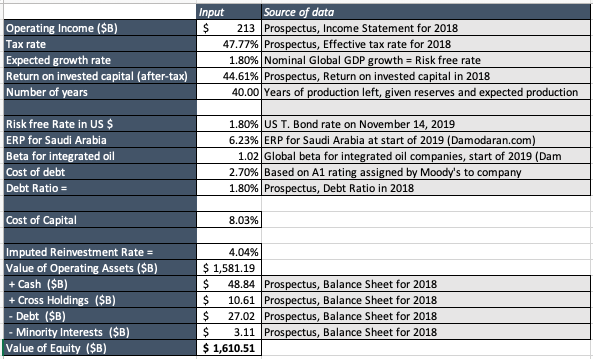 The average of the three method comes to roughly $1.56 trillion.
IPO Done
The final pricing for the IPO was close to $1.7 trillion and interestingly the issue was sold more to regional investors than foreign ones. The company promises to be a good investment for the investors provided they treat their investment as a fixed income investment and less of a free market equity.
Now with the IPO done and investment of $25.6 billion received all eyes would be now on the next move by the company or i would say the country.