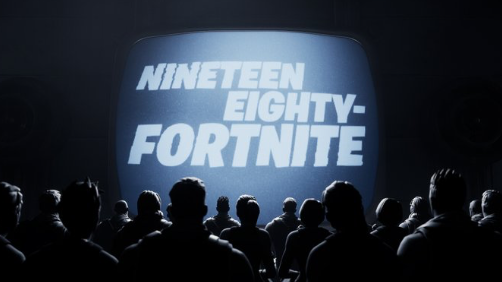 Last week an American video game and software developer head quartered in North Carolina grabbed the attention of the globe by its legal challenge to the Tech giant Apple. Fortnite maker Epic Games went a step ahead and used a famous Apple advertisement of 1984 against the iPhone maker in a social media campaign accompanying the legal battle. Much like the original Apple ad, the Fortnite short is about a dystopian society envisioned in George Orwell’s novel “1984”, that is ruled by a monolithic totalitarian government that controls everything about its population, forcing them into total conformity. This leads to a population that’s stripped of individuality, marching in sync, dressing identically and all staring transfixed at a giant screen where a man with an apple-shaped head reminds them of the importance of their conformity.

The reason behind this acrimony was the decision by Apple to remove the popular app from its stores as the video game maker protested the decision to share 30% download fee. Its not the first time such an issue came up. Few other App developers such as Spotify have complained about it. Google also removed the game maker from its platform for the same reason.

Power of the Big Tech:

The Big 5 Tech companies Apple, Amazon, Microsoft, Alphabet (Google) and Facebook have become an integral part of our lives. In the morning we check our phones, send emails during office hours, during evening we listen to music, use social network and e-book reader. During all these activities we inadvertently use one of the products of the Big Tech companies. There’s no simple way to avoid those Big Five. Even if you subscribed to Spotify, you would probably still be using a Google Android phone, an Amazon speaker or an Apple iPhone to stream the music. Even if you deleted Facebook, you might still be using the Facebook-owned Instagram or WhatsApp.

The financial might of these companies are enormous with cash, cash equivalents and other short term investments on their balance sheets greater than the GDP of scores of countries in the world. The cumulative amount is around $480 Billion at the end of June 2020.

They are darlings of the investors as well. Apple recently became the first U.S company to cross $2 trillion market capitalization. Alphabet, Amazon and Microsoft are already well passed the $1 trillion mark and Facebook approaching around $800 million.

What is wrong in dominating the market?

Why punish a company for being successful by removing out competition? Isn’t that the goal of every company — to dominate your market?

Contrary to the common assumption, monopolies are perfectly legal in the U.S. According to the FTC, “It is not illegal for a company to have a monopoly, to charge ‘high prices,’ or to try to achieve a monopoly position by aggressive methods,” “A company violates the law only if it tries to maintain or acquire a monopoly through unreasonable methods.” It’s not easy to differentiate between anti-competitive behavior and just smart business practice.

Who is most affected by it and when? The consumer or the competition?

When illegal, anti-competitive practices are in place, the consumer does not get options to choose, the competition complains, and innovation is stifled.

Mergers and Acquisitions by Big Tech:

For many years, the Big Tech has skirted scrutiny over mergers and acquisitions and anti competitive behaviors with the reasoning that regulation and monitoring of technology companies kill innovation. Over the last two decades, the big tech has spent billions in acquiring competitors, cutting edge technology and access to new markets. Some of these acquisitions were under the scanner of the Federal Trade Commission (FTC) for anti-competitive behavior.

The top ten acquisitions in terms of deal size done by each of the Big Tech firms are: 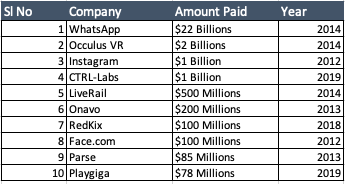 Even during the current Pandemic buoyed by huge available cash, Big technology companies are hunting for deals at their fastest pace in years, racking up acquisitions and strategic investments despite increased regulatory scrutiny. Alphabet, Amazon, Apple, Facebook and Microsoft have announced several deals this year representing the fastest pace of acquisitions to this date since 2015.

Apart from big deals, Big Tech has managed to gobble up smaller start-ups in areas from cloud computing boosting work from home during lockdown to gaming and entertainment for people restricted at home.

The deals mark a departure from the 2001 recession and the 2008 financial crisis, when tech companies largely retreated from big purchases following dips in the stock market.

Big Tech deal making has been under scanner of law makers who think that Big Tech has become too powerful. The FTC has began a review of the deals done by the Big Tech since 2010. The recent congressional hearing of the CEOs of Big Tech shows law makers are serious this time.

“This is the most bipartisan effort that I have been involved with in five and a half-years of Congress,” said Rep. Ken Buck (R-CO) as quoted by antitrust subcommittee chairman Rep. David Cicilline (D-RI) in his opening remarks.

Because truly bipartisan hearings are rare in Congress, the heads of Apple, Amazon, Facebook and Google were caught off guard on-topic questions about their operations. For example Amazon’s Jeff Bezos was asked whether his company forced small suppliers out of business by making similar products cheaper than they could. He said it was against policy, but that he couldn’t guarantee that the policy might not have been violated.

Facebook was questioned about the fines, its promises to do better and its apparent support of use of its platform as a way to make money. The company would be watched carefully as elections are less than 100 days away in the U.S.

Google was asked about the control people had over the use of their information, to which CEO Sundar Pichai claimed that people have complete control. “We today make it very easy for users to be in control of their data. We have simplified their settings,” he said. Facebook CEO Mark Zuckerberg also made a similar reply when asked about privacy. But this time both Google and Facebook were asked detailed questions about their advertising models and the fact that internet users had no real choice when it came to sharing their personal data with either company.

Apple CEO Tim Cook meanwhile was queried about his company’s app ecosystem and the percentage of revenue the company takes for in-app purchases. He replied that developers could sell their apps in other places.

This hearing is probably not good news for the tech industry. Because it was by the House Subcommittee on Antitrust, the ultimate goal of which is to produce some kind of antitrust legislation. However, each of these companies is very different from the other. For example, while Apple has about half of the smartphone business in the U.S., most of the other half belongs to a host of companies affiliated to Android of Google. Amazon dominates the online sales, but they don’t control the entire retail industry. This means that any legislation that emerges from the committee cannot be a generically applied.

The most likely target of the antitrust legislation or regulation seems to be Google and Facebook. Both companies received a great deal of criticism for their advertising businesses, their privacy practices and their near total control over user data. Apple, Amazon and Microsoft could face the music next.