In his book ” Rise of the Robots” Martin Ford shares an interesting incident involving Nobel laureate economist Milton Friedman. The incident dates back to the period when he was consulting for the Government of an Asian nation and was touring a large scale public works project. He was surprised to see that the large number of workers were only using shovels and no big machines were deployed. He asked the official in charge of the project for the reason behind the absence of machines and got a reply that the project was aimed at job creation. Milton Friedman’s caustic reply “so then, why not give the workers spoons instead of shovels?” is often seen as the skepticism expressed by economists to the fear of automation.

The above skepticism is well founded as the U.S experienced its golden period of economic boom and workers welfare in the two decades post the World War II. This partnership seems to have been broken in the later part of the 20th century and became evident in the first decade of the 21st century. In an article in The Washington Post published in 2010 the writer states that no new jobs were created in the decade ending 2010. The decade will off course be remembered for the financial crisis in 2008 resulting from years of cheap credit boom. 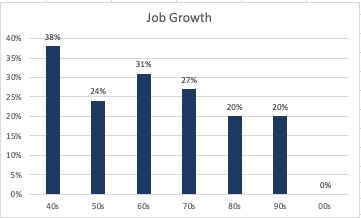 The relentless technological acceleration in computing technology referred widely as moore’s law which states that computing power roughly doubles every 18-24 months, is credited for the boom. This progress developed machines which increased productivity of workers. Now we are entering an era where machines with Artificial Intelligence and Machine Learning can substitute a worker. The progress in this field was going on at a certain pace until the Pandemic struck.

COVID-19 discussions have dominated 2020 and have captured the attention of everyone from Heads of the State to common man on the streets. This anxiety and fear would end one day eventually but what would remain is the set of behaviors and norms in our work lives which would unequivocally accelerate the march towards automation. Automation has been a major force reshaping work since long before the pandemic; now, it’s taking on a new urgency in the context of business risk and resiliency.

While the trend of remote working was already on the rise, not all jobs can be performed remotely. According to data from BLS Only 29% of Americans can work from home. The Work from Home (WFH) works near perfectly for services sector firms which look for creative ways — including webinar, online education, and virtual interactive events — to ensure continuity of work for employees practicing social distancing. These trends will persist after the pandemic, leading to greater acceptance of flexible working arrangements. Google recently asked its employees to join in 2021 Summer.

But WFH cannot be done in a firm where physical goods are involved. In the coming months as the effects of the Covid-19 lockdowns ripple through economies, nearly every business in the world will look for ways to reduce costs, conserve cash and make the most out of investments. Many involved in a manufacturing setup would be reviewing investments in technology and automation to maintain continuity. The assembly line automation, use of robots in eCommerce, kiosks in service centers will all gain wider acceptability.

As global supply chains become a casualty of the Pandemic, it’s a world of extremes for supply chain managers. Governments shut down physical stores, but online operations flourished. This put big pressure on distribution centers compounded by illness fearing workforces and social distancing requirements driving productivity down. Consumers are desperate to get orders delivered to their homes but supply frequently constrained.

One route, and an increasingly prominent one, is automation. Companies are now putting automation on a high priority footing as they look to drastically increase productivity per worker and per available unit of space in order to better cope with the COVID-19 crisis, risings costs and to compete long term.

According to data published by Bain & Company consulting firm an overwhelming majority of executives across sectors advocate adoption of automation. 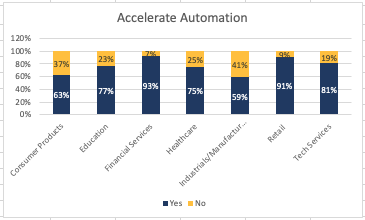 The health crisis induced by the Pandemic would likely encourage a range of labour replacing technologies. This would be disruptive and challenging for the workers.

Is automation the better way to recovery?

The call for better safety and protection for workers is an issue debated in every country. The Pandemic has only reinforced them.

How can firms safely bring back workers to the floors and guarantee their safety? One of the most significant challenges is workers falling ill to the virus–Recently in the U.S nearly 5,000 meat processing workers tested positive for COVID-19, according to the Centers for Disease Control and Prevention (CDC) which severely disrupted meat supply in the market. To make matters worse, asymptomatic transmission makes it very difficult to prevent the spread of the virus. Outbreaks will continue to plague factory floors at large plants, and it is not just the food industry that the Coronavirus affects. Manufacturers are taking extreme measures to prevent the spread with temporary factory shutdowns. If companies do not react appropriately, closures remain in effect, and the return to work will be further pushed out.

Contactless food handling by robots is an essential solution for food processors. Before the pandemic, demand for food automation was growing and continues to grow. Labor shortages, the pressure to increase productivity, and expectations for contaminant-free processing are all reasons why food manufacturers should automate their processes. A contactless, robotic automation operation will help in achieving all goals – including business survival. With the help of robots, food processors can automate food and help prevent outbreaks.

Robots are already filling the gaps in the workplace as the Pandemic forces people to social distance. Given the social distance guidelines, manufacturers need a flexible and adaptable solution and they can do this with the help of Collaborative robots (cobots). Cobots are proven to be a valuable solution for big and small manufacturers by filling the labor gaps. Working safely alongside humans, cobots are tasked with picking, sorting, or replenishing. As needs change, cobots can be moved, re-programmed, and re-deployed to multiple applications offering great flexibility to manufacturers. Adding cobots to current productions will not only help to maintain social distancing guidelines but can give workers the confidence to return to work. Social distancing directives are likely to continue after the pandemic and robots will help keep operations running. The post-coronavirus era may accelerate the adoption of more flexible collaborative robots to improve efficiency and help businesses stay afloat.

What about structural unemployment?

A research done by MIT economist Daron Acemoglu using data of robot deployment in 19 industries in the U.S and comparing it with employment data of the BLS the following observations are done:

a. “From 1990 to 2007, the study shows, adding one additional robot per 1,000 workers reduced the national employment-to-population ratio by about 0.2 percent, with some areas of the U.S. affected far more than others”.

b. “This means each additional robot added in manufacturing replaced about 3.3 workers nationally, on average”.

c. “That increased use of robots in the workplace also lowered wages by roughly 0.4 percent during the same time period”.

Thus adding Robots in the past have led to job losses and income inequality nevertheless boosting productivity.

While a lot of uncertainty remains as we navigate this pandemic, many manufacturers will need to turn to automation to support their operations. As factories plan to reopen, companies will need to quickly re-evaluate current processes and strategize on how to make up for the labor challenges. As more people fall ill to the Coronavirus, robotic automation is likely to become an essential part of the recovery phase.

As automation gains there would undoubtedly be some who would have no jobs post the Pandemic. It’s a harsh reality nevertheless it is inevitable.